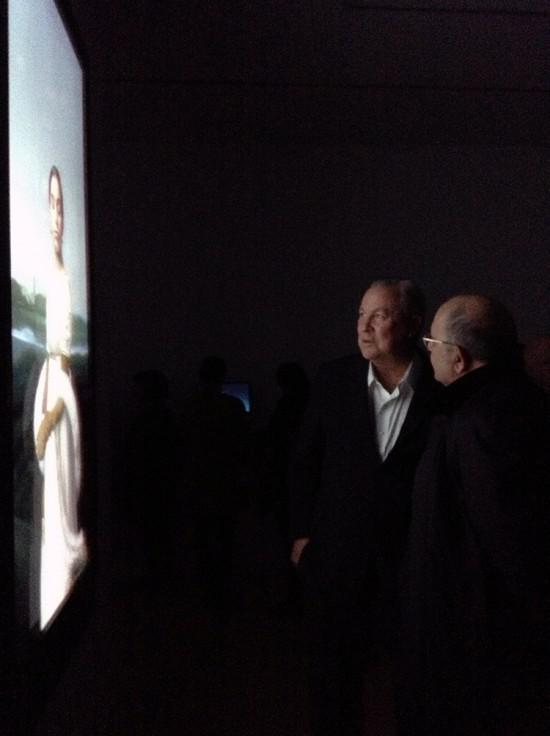 Bernier-Eliades Gallery presented few days ago American artist Robert Wilson‘s new show in Athens titled Video Portraits of Lady Gaga. This is the second solo exhibition made by the artist in the gallery. The portraits of Lady Gaga were filmed in October 2013 in London and premiered in November 2013 in the Louvre as part of the exhibition Living Rooms, of Robert Wilson. This exhibition resulted from a unique collaboration between the Louvre, Robert Wilson and Lady Gaga. Wilson created a series of video portraits of the pop artist, influenced by three classic works belonging to the permanent collection of the Louvre museum: the Miss Caroline Riviere, of Jean-Auguste Dominique Ingres (1806) The death of Marat, of Jacques Louis David (1793) and Kefalas of John the Baptist on a plate of Andrea Solari (1507). The fourth project called Flying, not from the museum’s collection. It is contemporary work, with references from ancient Japanese technique binding Shibari. In this show, the face and the body of Lady Gaga transformed the characteristics of Mademoiselle Rivière, a video inspired by the famous portrait of Ingres. Wilson also gives us a variation in eleven steps, based on the work of Andrea Solari “The head of John the Baptist in a dish” (1507), in which the model of the 16th century and the face of the pop star, merge one with another. Apart from these projects, the show features the background of the collaboration between the two artists and of their creative projects. Robert Wilson and Lady Gaga is in action during video shooting Flying. The Robert Wilson dictating every move, every element of the landscape and every nuance of light.